An Edmonton woman who testified this week against the man accused of kidnapping and sexually assaulting her was “an extraordinary witness” with remarkable recall, a Crown prosecutor said Friday during closing arguments.

The evidence in the case was “overwhelming” and supported the version of events recounted in court by the witness, who can only be identified by the initials C.M. due to a court-ordered publication ban.

“Her testimony was credible, it was reliable,” Crown prosecutor Carole Godfrey said.” She was careful with her answers when she was not sure. She did not inflate or inflame. She just explained what happened. Her recall was remarkable.”

Defence lawyer Dale Knisely called no evidence at the trial. But in his closing argument Friday he questioned the reliability of C.M.’s testimony.

The 52-year old woman told court that in July 2016 she was working in the sex trade along 118th Avenue and agreed to have sex with Ryan Dechambre for $60.

She said Dechambre, 30, kidnapped her and took her to his north-Edmonton home. She said she was forced to have sex with him at least 10 times against her will and was locked naked in a closet off and on for several days.

C.M. also claimed that Dechambre slapped her, held a knife to her throat and whipped her with an extension cord and coat hanger during an ordeal that Godfrey described as “horrific.”

Dechambre is charged with kidnapping, sexual assault, extortion, possession of a weapon dangerous to the public peace, assault with a weapon, uttering threats and unlawful confinement. On Friday, Godfrey withdrew a robbery charge and one weapons charge.

In his closing argument, Knisely admitted C.M. was in Dechambre’s car and house that summer but suggested she stayed with him voluntarily.

“It’s our position that at the time this takes place, she really doesn’t have a place to live,” Knisely told Court of Queen’s Bench Justice Paul Belzil. “She’s got no place to go. It is reasonable to assume the accused would have offered her a place to stay.”

Knisely suggested C.M. came up with her story after the fact, to explain to her friend why she had disappeared for a week. 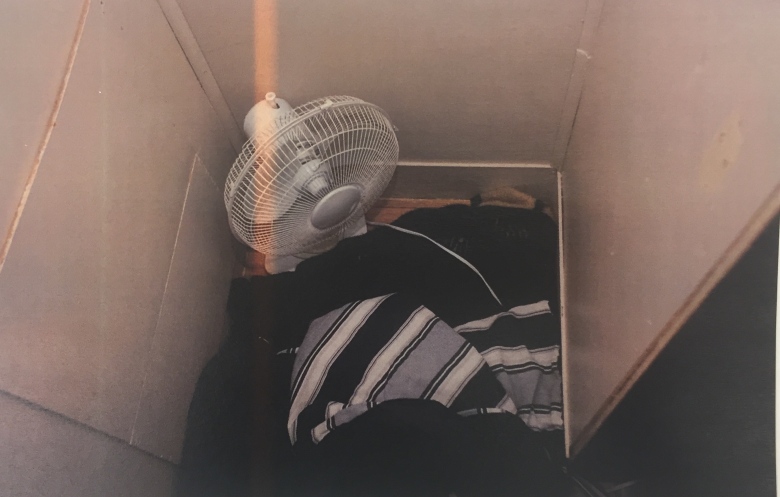 One of the closets where C.M. said she was kept locked up by her kidnapper. (Edmonton Police Service)

The defence lawyer said “it’s not necessarily true” that C.M. was locked in a closet.

A photo taken by police that was entered as an exhibit shows a blanket, pillow and fan in one of the home’s closets.

“The picture of the closet speaks a thousand words,” Godfrey said.

During cross-examination on Thursday, Knisely repeatedly asked C.M. why she never tried to escape. She testified she was too scared to try.

On Friday, during closing arguments, the defence lawyer wondered aloud why C.M. never tried to get away while Dechambre was asleep on the bed beside her.

“There is ample reason why this woman would have feared for her life,” Godfrey told the judge. “He created an atmosphere of sheer intimidation, terror and fear. That’s why she was afraid to run.”

Belzil is scheduled to hand down his decision Monday afternoon. Dechambre remains in custody at the Edmonton Remand Centre.

Search your Cities weather below

Sherwood Park is a large hamlet in Alberta, Canada within Strathcona County that is recognized as an urban service area.[7] It is located adjacent to the City of Edmonton’s eastern boundary,[8] generally south of Highway 16 (Yellowhead Trail), west of Highway 21 and north of Highway 630 (Wye Road).[9] Other portions of Sherwood Park extend beyond Yellowhead Trail and Wye Road, while Anthony Henday Drive (Highway 216) separates Refinery Row to the west from the balance of the hamlet to the east.[9]

Sherwood Park was established in 1955 on farmland of the Smeltzer family, east of Edmonton. With a population of 70,618 in 2016,[6] Sherwood Park has enough people to be Alberta’s seventh largest city, but technically retains the status of a hamlet. The Government of Alberta recognizes the Sherwood Park Urban Service Area as equivalent to a city.

Sherwood Park, originally named Campbelltown, was founded by John Hook Campbell and John Mitchell in 1953 when the Municipal District of Strathcona No. 83 approved their proposed development of a bedroom community east of Edmonton. The first homes within the community were marketed to the public in 1955. Canada Post intervened on the name of Campbelltown due to the existence of several other communities in Canada within the same name, so the community’s name was changed to Sherwood Park in 1956.
Geography

The Sherwood Park Urban Service Area is located in the Edmonton Capital Region along the western edge of central Strathcona County adjacent to the City of Edmonton.[8] The majority of the community is bound by Highway 16 (Yellowhead Highway) to the north, Highway 21 to the east, Highway 630 (Wye Road) to the south, and Anthony Henday Drive (Highway 216) to the west. The Refinery Row portion of Sherwood Park is located across Anthony Henday Drive to the west, between Sherwood Park Freeway and Highway 16. Numerous developments fronting the south side of Wye Road, including Wye Gardens, Wye Crossing, Salisbury Village and the Estates of Sherwood Park, are also within the community. Lands north of Highway 16 and south of Township Road 534/Oldman Creek between Range Road 232 (Sherwood Drive) to the west and Highway 21 to the east are also within the Sherwood Park urban service area.

Check Your Cities Weather Below

I was young and now I am old, yet I have never seen the righteous forsaken or their children begging bread. They are always generous and lend freely; their children are blessed. – Psalm 37:25-26